Transformers: Forged to Fight Wiki
Register
Don't have an account?
Sign In
Advertisement
in: Bots, Autobots, Generation 1 Autobots,
and 9 more

Widely regarded as one of the most skilled military tacticians — perhaps with an ego the size of Cybertron — Grimlock is the self-proclaimed “King” of the Dinobots.

Grimlock Purifies Damaging Debuffs and has a chance to activate a Melee Buff for each Debuff Purified.

Grimlock has one of the highest health ratings of any Bot, with melee buffs and instant purification (if Awakened), and a pretty powerful Burn. but otherwise a pretty simple tank with few needs for buffs.

Grimlock can gain Melee Buffs from his Dino Rage, being hit, and Special Attacks, so constantly use heavy attacks to renew and stack up the buffs. He is one of the few Bots who only need one level on his Signature to be effective.

Grimlock is the best bot in Raids. Bots with harm accelerators will give Grimlock a free melee buff at the start of the fight. He also makes a big joke out of Utility Modules that inflict damaging debuffs (such as Unstable Energon).

Avoid inflicting Damaging Debuffs. Bleed or Shocks will be unable to deal out their maximum damage and Grimlock has no weakness against any attacks. However, instant damage debuffs can bypass his Dino-Rage ability. Backfires inflicted by Barricade, Jazz and of course Scorponok will ignore the signature ability. Megatronus and Galvatron can inflict instant heat damage which will ignore his signature ability too.

Grimlock is immune to damage in Dino mode, which is during Heavies and Special Attacks. As such the technique of a Heavy Attack after the opponent finishes a special is ineffective unless it's launched late enough.

Also keep your dodging skills in check! An Al Grimlock loves to dash at opponents like Motomaster and will not stop attacking with his melee attacks until you are down. He really needs to learn how to stop trying to hit opponents while they are dodging continuously.

Bots that rely on inflicting damaging debuffs and has a low health rating will not fit well with the dino-rage signature ability. Those like Bonecrusher, Shockwave, Ironhide, Megatron (ROTF), Optimus Prime (M1), Ultra Magnus, Bumblebee (DOTM), Sideswipe and others will struggle with defeating Grimlock. Optimus Prime is also a weak choice because his signature ability will only fuel Grimlock’s rage despite being a brawler.

Grimlock might be the easiest fight in the entire mission. He remains unbuffed and serves as the intermission.

Me Grimlock protect base with these Mods! 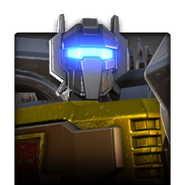 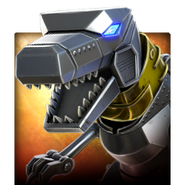 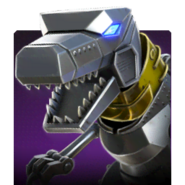 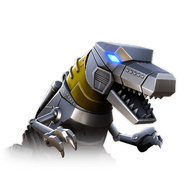 Grimlock asks the Commander to rate the game. 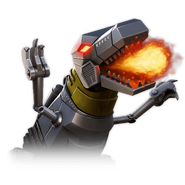 Grimlock gets angry if the Commander says no.
"Raah! Me Grimlock need to know why?" 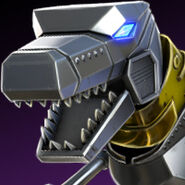