Transformers: Forged to Fight Wiki
Register
Don't have an account?
Sign In
Advertisement
in: Bots, Autobots, Cinematic,
and 10 more

Autobot Hound has a mean bark and a nastier bite. This brave warrior will back his teammates no matter how grim the struggle. Armed with enough weaponry for a small army and quick to improvise, this Autobot is able to hold his own in any situation.

No Bot Left Behind

In the heat of a firefight this robust robot uses his surprising agility to maneuver and exploit the enemy's weak points.

Hound may not have the strongest basic and Special Attacks, and his Burns are longer than stronger, but his Precision Ammo mode is useful in specific situations. Enemies can't Evade Hound's Precision Ammo ranged attacks. If affected by a Daze, Hound can Sidestep with this Precision Ammo. His only disadvantage is that he relies on his Ranged Attacks to connect to deal their maximum damage. Hot Rod is a safer option for Ranged Attacks and anti-evade through those Ranged Attacks.

Dodging Hound's Special II can be tricky, as it will fire almost instantly. The best (if not very effective) way to at least reduce its damage is Blocking. It is possible to sidestep all the bullets, but the grenade requires sidestepping at the right moment.

You're entering a world of Guns & Ammo with these Mods! 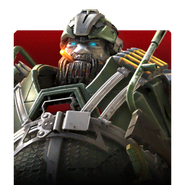