Transformers: Forged to Fight Wiki
Register
Don't have an account?
Sign In
Advertisement
in: Bots, Tech, Generation 1 Autobots,
and 8 more

Ranged
Jetfire is a Tech Autobot.

‎A scientist first and foremost, Jetfire was famous for his many exploits in outer space alongside his partner Starscream. With the galaxy now engulfed in war, Jetfire soon found Starscream had turned away from the pursuit of truth and joined the Decepticon ranks. Reluctantly taking up arms against his old friend, Jetfire eventually sided with the Autobots in their quest to protect all sentient life.

A well-timed Block is when the block key is held just before a hit lands. It may be tricky to pull off, but successfully doing so will give Energy Charges for small Repairs or for his Specials to be remotely more useful.

Reflecting ranged attacks is his main game - if you're careful enough, he can reflect even the strongest of Ranged Attacks - physical or energy - back at his attacker. Adding to the insult to injury is that these reflected Ranged Attacks will make Jetfire's Shock Damage more devastating. Once you master him, he will serve very useful in lots of different scenarios. Note that Special Attacks can't be reflected.

Stick to melee attacks, they'll serve you well. An AI Jetfire is known for their well-timed Blocks, which may put you at a disadvantage - especially if you use Ranged Attacks a lot. If any of your Ranged Attacks are reflected, dodge as soon as possible.

As of the v8.0 update, Jetfire is literally a walking Strange Refractor (just without the damage dealt on blocking), especially if he's AI-controlled. Try not to hit him when he's blocking.

Defend your base with Jetfire and these Mods! 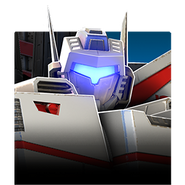