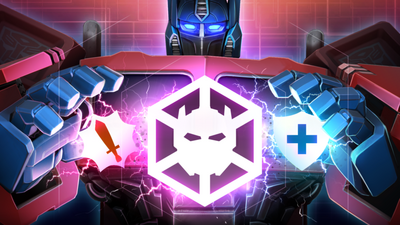 Commander Masteries, introduced in Version 3.0, are a selection of offensive and defensive bonuses that apply to your entire roster of Bots. Commander Masteries provide you with permanent bonuses to all Bots; at all times, though some may be restricted or modified based on the game mode, Bot, or other situational criteria.

Masteries can be accessed through the base or the Commander profile. By the point a Commander reaches level 60, they will have 43 mastery points to allocate.

There are plenty of different strategies you can utilize when building out your Commander Masteries, but they all have one thing in common… They’re here to bolster your team in a fight!

Commander Masteries are separated into two different categories: Offensive and Defensive; which bolster your damage output or your ability to negate or minimize damage respectively. Additionally, Commander Masteries may have multiple ranks for you to unlock, each of which will power up the benefits you receive from that Commander Mastery, or unlock additional benefits. [1]

Some Commander Masteries are more effective in certain modes of the game, while they may be less effective in others. The option to reset your choices allows you customize a build for whatever challenge that you choose to focus on!

The full Offense Mastery tree is on the Kabam Support Guide.[2]

Basic Ranged Damage is increased by +8%~16% based on the distance from the opponent. Precedes Gunslinger.

Grants an Attack Buff that adds +6%~16% Attack Rating to your next attack after successfully sidestepping a ranged attack.

Grants an Attack Buff that adds +8%~18% Attack Rating to your next attack after successfully sidestepping a melee attack.

Increases the damage dealt by Critical Hits by +6%~15%.

When an enemy Evades, your Bots have a [X]% chance to become Unstoppable for 1.0 seconds and add +[X]% Attack Rating to their next hit. While your Bots are Unstoppable, their Combo Meter is not reset.

Each debuff on enemies reduces their healing and repair effects by 5~10~20%. Useful against Mission bots with Repair Timed and Last Ditch Repair mods, so any debuffing Bot can prevent them from out-healing damage.

When your bots inflict Stun, they also reduce enemy trigger rate by 10~45% and repair rate by 20~90% for the duration of the Stun.

The full Defense Mastery tree is on the Kabam Support Guide.[3]

Increases passive Armor for all Bots in order to endure 1%…4% more attack damage.

With the help of nanotechnology, your Bots automatically recover some health over 40-60 seconds each fight.

Branches out to Feeding Frenzy and Willpower.

This Mastery is especially useful with an awakened Wheeljack.

Whenever your Bots attack while suffering from Bleed, Burn, Shock or Acid effects, they recover Health equal to 3~9% of the damage they inflict. Does not stack with other Willpower abilities.