Transformers: Forged to Fight Wiki
Register
Don't have an account?
Sign In
Advertisement
in: Bots, Generation 1, Decepticons,
and 9 more

Power of the Primes

Megatronus is a powerful Boss-level Demolitions bot who may choose to go class-less. By doing so, he becomes even more powerful.

Megatronus' arrival into New Quintessa was part of an elaborate plan by Generations Megatron to gather the power of the Primes, spanning multiple Spotlight Missions.

After having Shockwave taking possession of the Forge of Solus Prime, Megatron sets up a quest to gather the power of the Primes. During Jazz, Tantrum and Wheeljack's arrivals, Megatron sets up an excavation site to secure pod from which he believes bears another ancient Relic. However, further research by Soundwave demonstrates a living Bot is inside.

Now at full power again, and with his Relics gathered in his Tomb, Megatronus came to Cyclonus, who needed help with defeating Optimus Prime. The god told Cyclonus that he needed to bide his time before he could face the Autobot leader.

Later, Megatronus contacts Optimus, calling him "13". However, Optimus tells the god he is not a number. Megatronus tells the Autobot leader that he cannot escape his path. Optimus and the Commander manage to successfully subdue Megatronus.

He would later unleash a wave of corruptive energies over New Quintessa and captures Optimus Prime, Ultra Magnus and Megatron. The pulse ends-up picking a Squad of Autobots composed of Ratchet, Jazz, Arcee and Prowl, leaving only Arcee in full sentience after corrupting and driving her teammates mad.

After freeing Optimus and Ultra Magnus, Arcee stands up to Megatronus with the help of the Commander. At the end of the struggling showdown, the Commander, Optimus, Ultra Magnus and Arcee are able to lock Megatronus once again inside his Tomb of Relics, hoping it would be enough to contain the Fallen God's power for now.

However, Megatronus would later escape the Tomb, and afterwards awakened a Decepticon Titan. He is joined by Megatron, Cyclonus, Megatron (ROTF), and Galvatron as they threaten the Commander. However, the Commander manages to defeat Megatronus.

The Titan that Megatronus awakened would send New Quintessa into a time storm, which would open up the gates to a "ReForged" portal.

Prior to this Spotlight, Megatronus apparently spoke to the Titan he awoken and learned some "secrets". He is also the main cause of the temporary cloaking across New Quintessa.

While not directly interfering with New Quintessa, Megatronus is the final boss of Map 3.

As a boss, Megatronus has no class and has these stronger and additional abilities:

When Filling a Power Bar:

Megatronus is an extremely powerful bot who is ruthless and unchallenging, as should be his playstyle. Melee and ranged attacks deal very good damage so utilize them. Dark burns deal more damage through heavy attacks. However, his best damage lies in his special attacks.

One disadvantage Megatronus has is that his passive power gain and situational power steals are his only ways of getting power that is greater than his passive generation; he cannot gain power from hitting and being hit. As such, mods or abilities that constantly drain power are his greatest weakness.

His other weakness is his Relic of Immortality only activates when 10% is reached; If a single hit deals enough damage from 11%< to 0% it is over and finished.

Specific Relic Effects and their Effects on Special Attacks

To use Megatronus effectively, you must switch his relics strategically. This section covers how to activate a specific relic effect on Special Attacks (excluding Immortality). First, let's look at when the relics activate and their effects.

The order that the relics switch:

If you have used a Special Attack and mixed up Relic switching:

It takes 15 seconds to fill one Power Bar, up to 45 seconds for all three; this doubles on a Robot Resource.

What must matter on both Special Attacks is that THE FIRST HIT MUST CONNECT to activate the effect. If it doesn't, the effect won't activate.

What comes out of your Special III is up to you. The first hit of that Special can either Steal Power or Life (though it is less reliable compared to his first two Specials), but either way, is intended for raw power.

Megatronus has an Improved Aim Enhancer mod in Expert and Master Spotlight Missions, and as the final boss in Alliance Missions, so Blocking will be useless. Keep your dodging skills in check. Frequent dodgers like Sideswipe and Barricade will be useful, though risky in the long run as they have lower health than the average Bot.

However, there are also bots to counter his Relic of Immortality. Ramjet and his large number of special buffs will enable him to keep fighting, but like Wheeljack's Force Shield he can't take damage but still gains power. Ranged fights will be challenging but not impossible.

Bots that rely on applying or gaining buffs or debuffs (respectively) will not fit well with the Deity's Relic of Obedience. Those like Wheeljack, Bonecrusher, Blaster, Mixmaster, Ironhide, Windblade, Megatron (ROTF), Ultra Magnus, Optimus Prime (MV1), even Grimlock and others will struggle with defeating Megatronus. Optimus Primal will also be a weak choice because he will only lose his critical armor and not gain any melee buffs if mistimed.

The Megatronus in the last fight of Chapter 1 of Act 4 is most likely the hardest fight in the game (Excluding Master spotlights, Rulers of Kaon and Revenge of the King of course). With unstable Energon dealing Shock damage every 7 seconds, and the Relic of Chaos dealing constant Burn damage, we can just go off on a whim and say... A duped Grimlock, 4-star R5/50 or 5-star R2/20 is your absolute safest bet.

If facing Megatronus on a Robot Resource, call up Kickback or Windblade to nullify the power gain.

Paring these mods with The lord of the demolitions will enhance his abilities and defend your base! 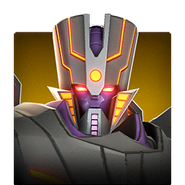