Transformers: Forged to Fight Wiki
Register
Don't have an account?
Sign In
Advertisement
in: Bots, Warrior, Decepticons,
and 8 more

Necrotronus is a Decepticon Warrior-class Bot. This variant of Megatronus depicts a merged version of the Fallen, having tried to awaken the dormant Necrotitan in New Quintessa at the end of Act 4.

After Jetfire and Wheeljack arrived in the past following an accident with their Chrono-Vector, they returned to the time of Megatronus's rising, two years prior. Much like in the past, they were able to overcome him, this time with the help of Decepticons, but the timeline alterations caused large repercussions in the story.

On their way back home, Wheeljack and Jetfire come across Nemesis Prime, who attempts to use corrupted Bots to stop them from returning to their timelines so the Chrono-Vector could be destroyed. When reaching Nemesis, he reveals that the Bots they fought were not corrupted, but instead, they were possessed by Megatronus's ancient spark, which was scanning for more power after being defeated. Though Nemesis is ultimately defeated as well, Megatronus's spark is able to access the Necrotitan deep within New Quintessa.

When the Chrono-Vector was finally prepared for transwarp, the time travelers were ambushed by Rhinox, "the herald", the Four Horsemen of Apocalypse, represented by Conquest, War, Famine, and Death. After the Horsemen were defeated, Necrotronus, a fusion of Megatronus and the Necrotitan, arrives, claiming that "they were responsible for the Chrono-Vector's technical problems, for they controlled the fates". The Autobots are briefly able to defeat Necrotronus and return to their home timeline to warn their allies of the coming danger.

Some time later, Wheeljack and Jetfire meet Ratchet and Grimlock, who after holding back the reversed universe invasion, were forced to help them fight the coming Horsemen of Apocalypse. Nemesis Prime, once again returning as Famine, affirms the existence of a "perfect pairing" that is capable of defeating Necrotronus, and attempts to defeat it. However, he once again slayed by the Autobots. Soon, the Autobots come across the Quintesson Scientist, who upon coming out of hiding announces to their shock that the perfect pairing to defeat Necrotronus consisted of Waspinator and Scorponok, for only they could not be corrupted. Following this, Waspinator and Scorponok go on a quest with the scientist to recruit all Decepticons to their cause. After that, all that remains is to recruit the Autobot forces.

Eventually, the Scientist and his minions are able to unite all Primes in New Quintessa just in time for Necrotronus to arrive in their timeline. With the combined efforts of all Autobots, Decepticons, Maximals, and Predacons, the Primes are able to briefly immobilize Necrotronus despite "their" great power, imprisoning it within the Scientist's Chrono-Vector prison, the Eternity Box.

It is said that Necrotronus will eventually return, for in control of the timelines, the Box might not be able to contain him for a long time.

As a boss in the final mission of Act 4, Necrotronus has no class and these additional abilities:

While Megatronus's strength is passive Power Gain, Necrotronus takes a much more active approach requiring hits to gain charges. He can also inflict bleed like all warriors and it will be refreshed whenever hit so sticking to melee attacks will be helpful as your opponent too will deal extra damage to the bleeds.

His Specials are much deadlier so use as much special ll’s or special lll’s as possible as he can finish the opponent before they know it and he can easily defeat bots with a low health rating and if Necrotronus is below 10% health, use as many specials as possible so it can fill up the bar while he is using it.

It is near-impossible to sidestep his second wave of triple-hit bolts of his Special 1, and woe if he finishes an opponent with his absolutely devastating final hit of his Special 2.

When Necrotronus is below 10% health, STAY AWAY FROM HIM (Unless you're a Brawler like Grimlock) to prevent burn damage. But at the same time, try to control his power to prevent his sp3, or to apply backfire so that his sp3 kills himself. 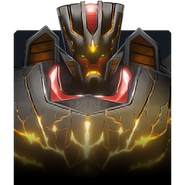 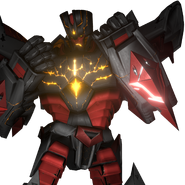 So powerful he gets two sprites!