Transformers: Forged to Fight Wiki
Register
Don't have an account?
Sign In
Advertisement
in: Bots, Generation 1, Decepticons,
and 8 more

Nemesis Prime is a Decepticon Tactician.

Created using a subspace impulse cloner, Nemesis Prime is a dark clone of the heroic Optimus Prime. Although he wears the Decepticon insignia, it’s unclear where his loyalties lie.

All stats shown below assume that the Bot has 0 Forge and a locked Signature Ability.

Artificial Matrix - Nemesis Prime saps the energy from his opponents, stealing their health.

Nemesis loves striking buffs away from opponents. This allows him to deal massive special II damage.

Pair these mods with Nemesis Prime on your base! 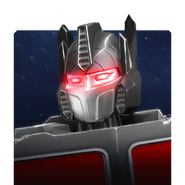 Shown when Special Missions are locked