Transformers: Forged to Fight Wiki
Register
Don't have an account?
Sign In
Advertisement
in: Bots, Autobots, Generation 1 Autobots,
and 2 more

After gaining the Matrix of Leadership, Hot Rod became Rodimus Prime! Although reluctant at first, Rodimus Prime rises up to lead the Autobots against Galvatron and the Quintessons.

When the odds are against him, Rodimus Prime is fueled by the power of the Primes to fight even harder.

Pair these mods with Rodimus Prime on your base! 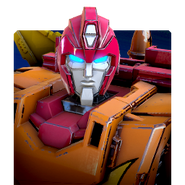