Transformers: Forged to Fight Wiki
Register
Don't have an account?
Sign In
Advertisement
in: Bots, Predacons, Beast Wars,
and 10 more

Scorponok’s seemingly slow wit contrasts sharply with his cunning and inventive nature. Fiercely loyal to his commander Megatron, Scorponok is one of the few Predacon subordinates that harbors no desire to usurp the lizard king.

Note: The table's stats are observed from in-game.

Scorponok is a very tough bot. Backfire debuffs punish special attack users and have more utility than Scouts like Barricade. However, Scorponok's dazed debuffs punish bots that have ranged special attacks. Demolition bots like Waspinator, Ironhide, along with others like Hound (well, until 8.0), Wheeljack, and possibly Megatron won't be able to inflict their strong damage.

Bots with strong special damage like Jazz, Optimus Prime, Demolition Bots; obviously, and most Tactician bots will be punished with Venom Backfires. If you're not as lucky to let Venom Backfires used, expiring them will still be punishing. Two will stun and three will deal large amounts of shock damage.

You can save up to 10 Venom Charges for longer fights to permanently increase attack until they are unloaded.

Avoid getting hit by his first Special attack. Missing ranged attacks can and will be detrimental unless you have bots that rely on melee attacks. Power drainers and burners will be your friend.

Especially avoid his Heavy Attacks. An Al Scorponok loves to uses his heavy attacks. 3 or more Backfires is a near-death sentence.

Superconductor 1000 & Superconductor 2000 - Bots who are more likely to use their special attacks will be punished by Venom Backfires. Just be careful to avoid the hits if they don't get KO'd.

Pair these Modules with Scorponok on your base! 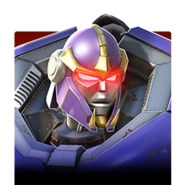