Transformers: Forged to Fight Wiki
Register
Don't have an account?
Sign In
Advertisement
in: Bots, Decepticons, Generation 1,
and 8 more

Truly one of the most feared and powerful of all the Decepticons, Shockwave’s existence is driven solely by one thing – logic. Void of emotion, but teeming with strength and intelligence, he seeks only to advance circumstances to their logical conclusion…however grim that may be.

Shockwave activates his Undo ability when filling a bar of Power. When Undo expires, he instantly Repairs any damage he took in the last few seconds.

Shockwave is pillow-fisted when it comes to close combat, but his strength is in his Shock debuffs, which are inflicted though ranged attacks and special attacks. With these Shocks he can reliably drain an opponent's Power bar.

Keep in mind that his Undo signature ability does not undo damage from blocked attacks. So don't block and counterattack while Undo is active if he has the health to do so.

Shockwave is a relatively easy Tech bot to fight; just don't recklessly use basic ranged attacks, and try not to hit him while Undo is active.

Shockwave's Special 2 is a heavy hitter; while you can completely dodge the laser, your bot could still get caught by his first pulse wave hit, or get caught right after a sidestep. (Tip: you're more likely to get hit sidestepping up than down. So rapidly sidestep down at the right timing at least twice) It's easier to dodge his Special 2 with bots that can evade with heavy attacks.

Raiders who find a Shockwave on your base with these Modules will immediately find THIS raid to be illogical. 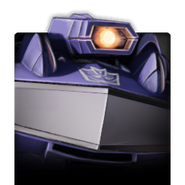 Old portrait based on his Beta design. 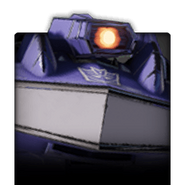 A different version of the old portrait. 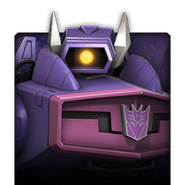 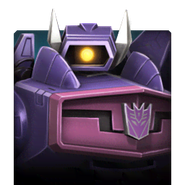 Shockwave in the Threating Three Crystal