Who is superior? Soundwave and his trusty minions Laserbeak and Ravage, that’s who! The Decepticon model of loyalty to Megatron's cause, he takes advantage of his title as Communications Officer to ingratiate himself with Megatron every chance he gets.

Soundwave projects a Sonic Shield that grants him Energy Resistance and a chance to Reflect incoming Ranged Attacks.

When filling a Power Bar: Soundwave projects a Sonic Shield that grants him 35% Energy Resistance and has a 20~90% chance to Reflect incoming Ranged Attacks, dealing 140% of their original damage.

While Soundwave has above average health than other Bots, his main drawback is that he cannot generate Power by attacking. However, if he manages to hit his opponent with his Heavy Attack or Special 2, he will start gaining Power over time quickly. If he gets hit, he will also gain Power as normal bots. If you can stall for time, do so after the power gain; then he will have a huge power advantage over the opponent.

Compared to Jetfire, who needs to pull of a well-timed Block, Soundwave is a safer option to use, but needs his Sig. Also, Soundwave's reflection deals more damage than Jetfire's. (100% on a max-ranked Jetfire compared to 140% on Soundwave)

Al Soundwave is greedy for power so dodge his heavy attacks and his Special 2 at all costs; doing so will prevent the greedy Soundwave from generating more power. Try to use as many normal attacks as possible so his Power will be remain capped at 2 bars. Abilities like Backfire and Nullify and anti-power abilities can hamper him from using his Special. Power leaks, nullifiers and power drainers will be your friend and that will prevent Soundwave from generating power.

Make Soundwave a Superior Base Defender with these mods! 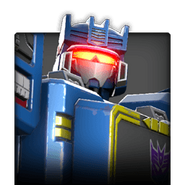 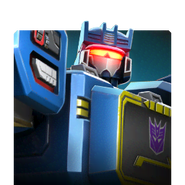