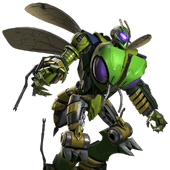 "Story gets that feeling too. We are but playerzzz and all the world izzz a stage."

"SEND ... MORE ... PARAMEDICS!" This article is a stub. You can help the Transformers: Forged to Fight Wiki by expanding it.

The story of Kabam's Transformers: Forged to Fight revolves around Optimus Prime, Marissa Faireborn and you, as the Ark crashlands on an unknown planet.

"I am Optimus Prime, leader of the Autobots." Today marks a landmark in our friendship with the humans of earth..."

"The Earth Defense Command (EDC) has volunteered their most capable crew, led by Marissa Faireborne, loyal friend to the Autobots. Together we have found a way to breathe life back into our home planet Cybertron." 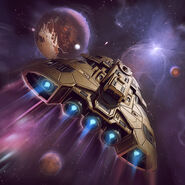 "Now we put our plans to the test and start the long journey home..." 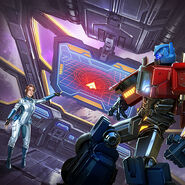 "Optimus, we are now passing the Eshems Nebula. Wait, I'm getting some strange readings.."
"Teletraan report!"

"Teletraan, can you identify our current position?"
"NEGATIVE. SCANS DO NOT MATCH ANY KNOWN PLANETS IN OUR DATABASE." 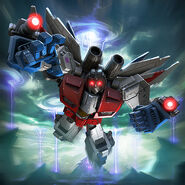 Note: The newest version of the game had changed the images and dialogue.

"I am Optimus Prime, leader of the Autobots."

"Today marks a landmark in our friendship with the humans of planet Earth..."

"With their help, and that of our loyal ally, Marissa Faireborne, we have found a way to bring life back to our home planet, Cybertron."

"Now we put our plans to the test and start the long return journey home..."

"Yet, the universe is a dangerous place..."
"Optimus, we are now passing the Eshems Nebula. I am getting some strange readings.."

"Teletraan, can you identify our current location? What planet have we crashed on?"

"NEGATIVE. SCANS DO NOT MATCH ANY KNOWN PLANETS IN AUTOBOT DATABASE."

As the Ark crashes, Optimus and Marissa gain footing and go on to investigate the mysterious circumstances of New Quintessa.

The Quints are... interesting.

The Sharkticons have arrived, but there's no bigger boat.

ROTF-Tron has arrived to New Quintessa.

Chapter 3: Into the Darkness

3) Mixing For The Master

"Story gets that feeling too. We are but playerzzz and all the world izzz a stage."

On September 26, 2019, the first chapter of the Act, Autobots Turn, launched.

Continuing from where Generations left off, Wheeljack and Jetfire are launched into a potential crisis as they end up in a parallel timeline (perhaps this was where alternate-Arcee originated from) where Megatronus' Titan-related carnage has not started. Emphasis on the has not.

There are no Autobots, no Marissa, no way to get back; all they face are corrupted Bots from a plethora of realities, ready to scrap the two. And with Shockwave in the mix, they are in for some serious trouble! To get back, they will have to put their Sparks on the line, as their journey home begins...

While Wheeljack and Jetfire, amongst a lot of Autobots, pummel at Megatronus, Bonecrusher and Soundwave get together a Decepticon rag-tag team consisting of Scorponok, G1 Megatron. Starscream and Thundercracker, and head on over to the Forge to see what's poppin'.

With Megatronus deactivated and Cyclonus and Galvatron sent packing, Nemesis Prime decides to stick his reality-bending hands into the story. And he corrupts lots of Bots. What kind of reality will Wheeljack, Jetfire and their new ally Arcee get thrown into next? Who knows! (until Chapter IV is released, that is)

Chapter IV: And I Saw!

With Nemesis Prime out the picture, a new challenger has arrived! It's corruption at its finest as this mysterious challenger dips into Bots' brain modules and changes them to be heralds... of something. Oh, and Titan Fragments introduced into the fray.

What happened to Megatronus? Will everyone be safe? Is it the Titan Crisis all over again? Or is it all child's play?