Transformers: Forged to Fight Wiki
Register
Don't have an account?
Sign In
Advertisement
in: Bots, Decepticons, Generation 1 Decepticons,
and 10 more

Ranged
Thundercracker is a Decepticon Brawler.

Often fighting in the shadow of fellow Decepticon Starscream, Thundercracker loves a good battle…but only against a worthy opponent. He hates fighting against humans because it feels like unfair victory rather than true combat, and Decepticons aren’t forged to fight by overpowering the weak.

Ascension - Thundercracker proves his melee worth by fighting off Debuffs, enhancing melee hits, and increasing his damage against tough opponents.

He is the only bot who can’t score a Critical hit (which actually puts him in a good position against Bonecrusher), but he can purify any damaging debuffs (and Backfires and Dazes) with Heavies, making this Purify one of the most powerful in the game. If you're inflicted with a potentially powerful debuff like Venom Backfires (especially over 3 stacks as they can Shock), just use a Heavy and you're good!

The best way to gain Melee Buffs is a Special I. After using it keep on attacking the enemy to keep his Melee Buffs active for long enough.

Don't inflict too many damaging debuffs nor spam Heavies (especially if you're using a Bot with a ground vehicle mode) as you'll only give Thundercracker Melee Damage Buffs (which refresh per Melee Attack he hits!). If he has recently tagged you with a Special I, try to avoid further hits to make his Melee Buffs lapse.

Choose some powerful aerial fighters like Megatronus, Cyclonus, or even Starscream. Thundercracker won't have any attack bonuses against Bots with a flying alternate mode.

Try not to use Heavy Attacks while he's above 15% health - It is to be noted that his Block can't be broken until he is below 15% Health.

Pair these mods with Thundercracker on your base!

Thundercracker was exclusive to his Challenge Mission, his Crystals and his Arenas. He is the second "Exclusive bot" in the game, the others are Bumblebee and Nemesis Prime.

Outside of these things, he was also obtainable through Nemesis Prime's Crystals and the Generations Crystals (joy!)

For two weeks, Thundercracker could be obtained through his challenge.

On April 11, 2019, Thundercracker crystals appeared in the Energon Store as part of a bundle, then during the Thundercracker Arenas for regular Energon purchase:

These Arenas are structured like the old Arenas of Featured Bots. That means only 30 grinding Commanders can get these Thundercrackers!

As part of Nemesis Prime's release, Thundercracker was made available in the Dark Matrix and Doppelganger Crystals for a week starting July 11, 2019, giving Commanders another chance at him (though it's all down to luck!)

From March 27, 2020, Commanders around the world felt joy as Thundercracker amongst the other two "exclusive" Bots were added to all Bot Crystals. 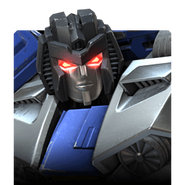 as he appears in Hard difficulty of his challenge

as he appears in the banner

as he appears in the newsfeed