Transformers: Forged to Fight Wiki
Register
Don't have an account?
Sign In
Advertisement
in: Bots, Autobots, Generation 1 Autobots,
and 8 more

Brilliant and eccentric, Wheeljack is both mechanical engineer and daredevil inventor for the Autobot forces. Despite their sometimes unexpected results, Wheeljack’s inventions have saved his allies countless times.

Wheeljack’s emergency Force Shield allows him to survive both potentially deadly attacks and catastrophic mishaps in the lab.

1. Prototype - Wheeljack puts his latest invention to the test. What could go wrong?

2. Iterate - Some improvements may be prudent.

3. Perfect - All outcomes meet the desired metrics for success.

Wheeljack has a low health and attack rating, but with three types of upgrades, he can adapt to different situations. Try going for three defensive Upgrades against high-attack bots like Brawlers with Melee Attacks. With three Power Upgrades, he can repeatedly win the Power race while repairing at SP3 and Power Leaking the opponent.

Wheeljack's Force Shield can be activated an unlimited number of times, so along with upgrade repairs, A skilled Commander can keep Wheeljack in top shape. The Force Shield is especially potent with the Nano-Repair Mastery; while the shield nulls all damage, a little bit of repair can keep his health from dropping below the shield activation percentages for the duration of the Nano-Repair.

Conversely, Wheeljack's Force Shield can be troublesome, especially if he has Nano-Repair in Raids and Arenas. The shield does not protect against damaging debuffs, so use Bots that deal frequent Bleeds and such to breach the shields.

Defend your base with Wheeljack and these Mods! 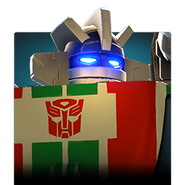 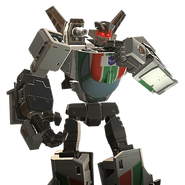